We would like to inform you that Ta and Abata class are going to visit Al Iman Mosque in cempaka putih. The purpose of this activity is to give children opportunity to get to know kinds of activity can be done at a mosque and things that can be found in a mosque. Children will also get a chance to give charity at the mosque.

Please have your child ready at school at 08.00 a.m on that day since we are going to leave for the mosque right away by bus. Since we are going to give charity to the mosque we will welcome any charity from parents to be given to the Mosque on that day. Al Iman Mosque will distribute the charity to those in needs. The charity can be in form of money or goods. If you are willing to donate please give the donation to your child class teacher the latest is Monday, November 12, 2018.There will be no other activity for Ta and Abata class on that day but school activities for Alief and Ba class remain the same.

Starting from October 20, 2018 , Abata class will pray dhuha every Tuesday  and Friday. Please get the praying mat and praying dress ready.

After the dentist informs and shows children how healthy teeth are and how to brush the teeth correctly, Ta and Abata class children will practice to brush the teeth together. Please bring tooth brush, tooth paste and plastic cup for this activity. Parents are advised to accompany the children during the dental health check and inform the class teacher if you will not be able to come, as the dentist would like to talk about the result of dental health check in person.

After Dental Health Check, children will still do their routine activity until their go home time comes.

Dear Parents
We would like to remind you about the :

On this PTC you can talk to your child class teacher about your child progress in the classroom. PTC will be based on First come First serve base, meaning, if you come earlier you will get a chance to talk to the teacher earlier too.

You have 10 minutes to talk to the teacher to give a chance to another parent who is going to do the same thing. We are sorry if we have to inform you if the time is over. If you need further discussion, you can discuss it after the school is over on regular school day after making appointment with the teacher.

On Tuesday, September 26, 2017 Abata holds Market Day event. The event is intended for children and their parents.The event was officially opened by our Principal Ms Dini Hendiani, M.Pd. Market day event can be a learning tool for students to grow children’s entrepreneurial spirit on early age and to let the children have experience in selling and buying.

Various stalls lined up neatly with attractive items to sell and filled with students, teachers and parents who are ready to do transactions. Children took turn to be seller and to be buyer using Abata bank note. The children tried their best to get their items to be sold 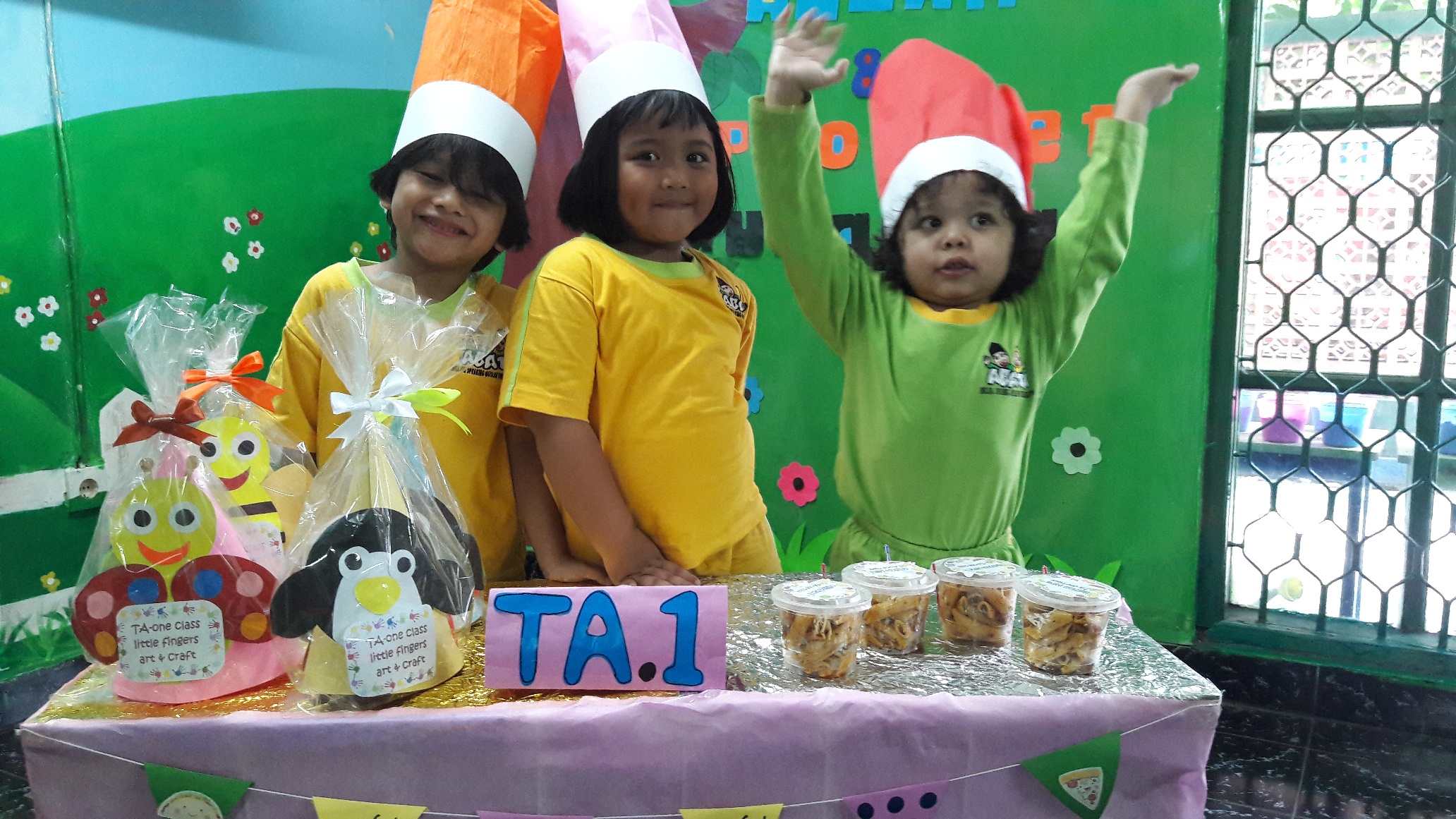 Congratulations to all Abata students on Market Day! We hope you will become one of successful entrepreneurs in the future and will share your strength to build the society, nation and State.

We would like to inform you that Miss Rida is chosen to go for Pendidikan dan Latihan Profesi Guru(PLPG) that is held by KEMDIKBUD through Universitas Muhammadiyah Prof.Dr.Hamka (UHAMKA) from Oktober 25- November 4, 2017 in Depok. This program targets teachers who meet certain requirements to get their teaching certificate from government. This means she will not be able to teach the children in our class for 8 days.

However, we will make sure that the class still runs smoothly with this arrangement. Miss Hera will be replacing Miss Rida while she is away.

Thank you for your understanding

Prior to manasik, teacher told the Asbabun Nuzul of Hajj and the story of prophet Ibrahim family. Teacher then showed children how to do the Hajj rituals and told the places of pilgrimage.

Alief and Ba Class got the first turn to do the manasik Hajj then Ta and Abata classes the second. Boys wore the ihram clothes and the girls wore the white moslem clothes and veil.

The Second was Tawaf : students started the Tawaf from Hajar Aswad and circled around Ka’bah counter clockwise seven times. Students stood facing the Black Stone and raised their right hand at the end of each circling while saying: “Bismillah, Allahu Akbar” (in the name of Allah, Allah is the Greatest). The circling is believed to demonstrate the unity of the believers in the worship of the One God, as the people move in harmony together around the Kaaba, while supplicating to God. 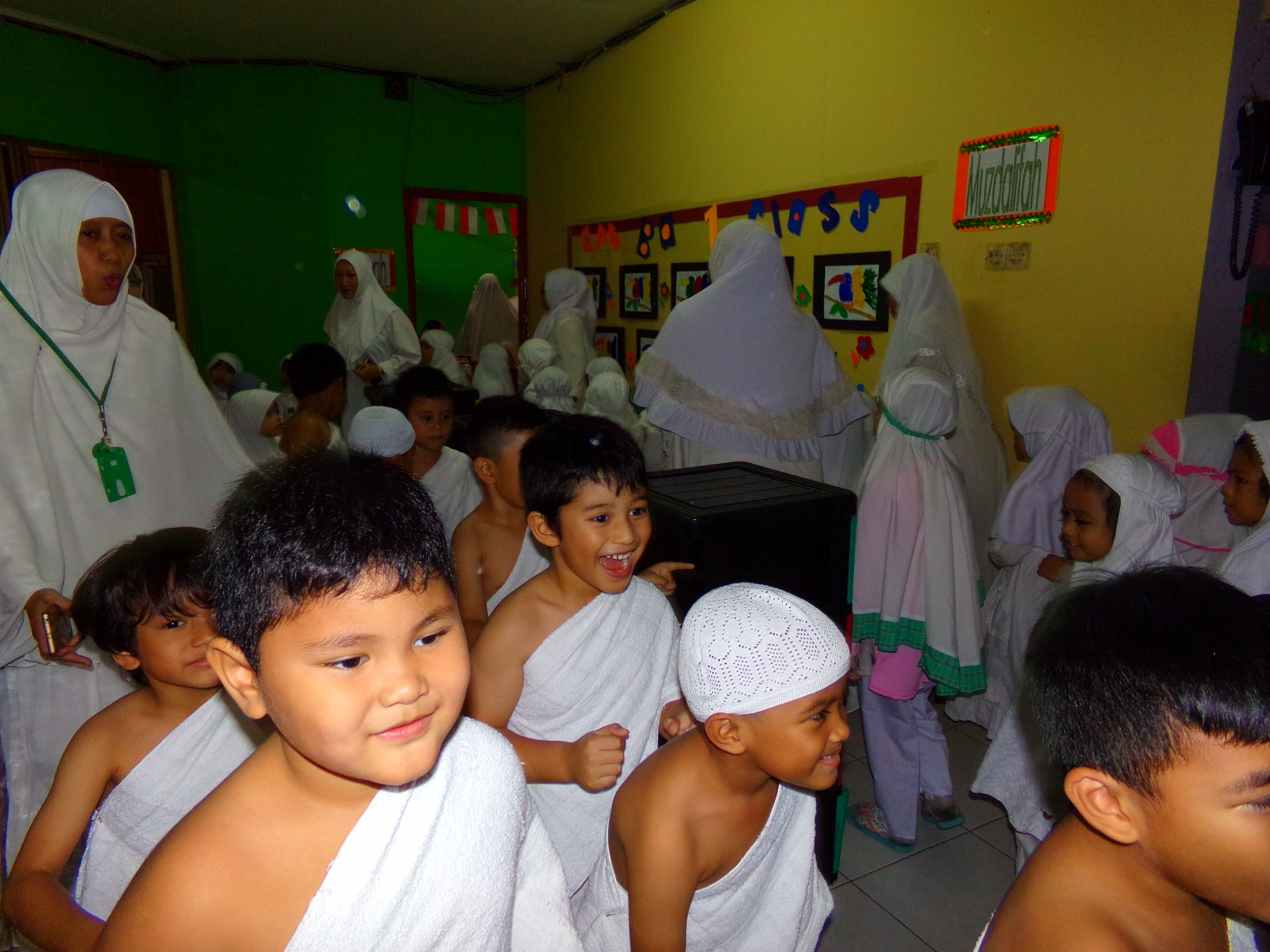 The Fifth was Wukuf in Arofah : Students recited Dzikir and Do’a for them selves and Family and hoped that Allah would forgive their Sin.

The Sixth ritual was Jumroh : Throwing the small stone into the monument

The Seventh was Tahalul : Students finished all the Hajj rituals then cut their hair. The final ritual of manasik hajj was performing Shalat Idul Adha and sacrificing goat. 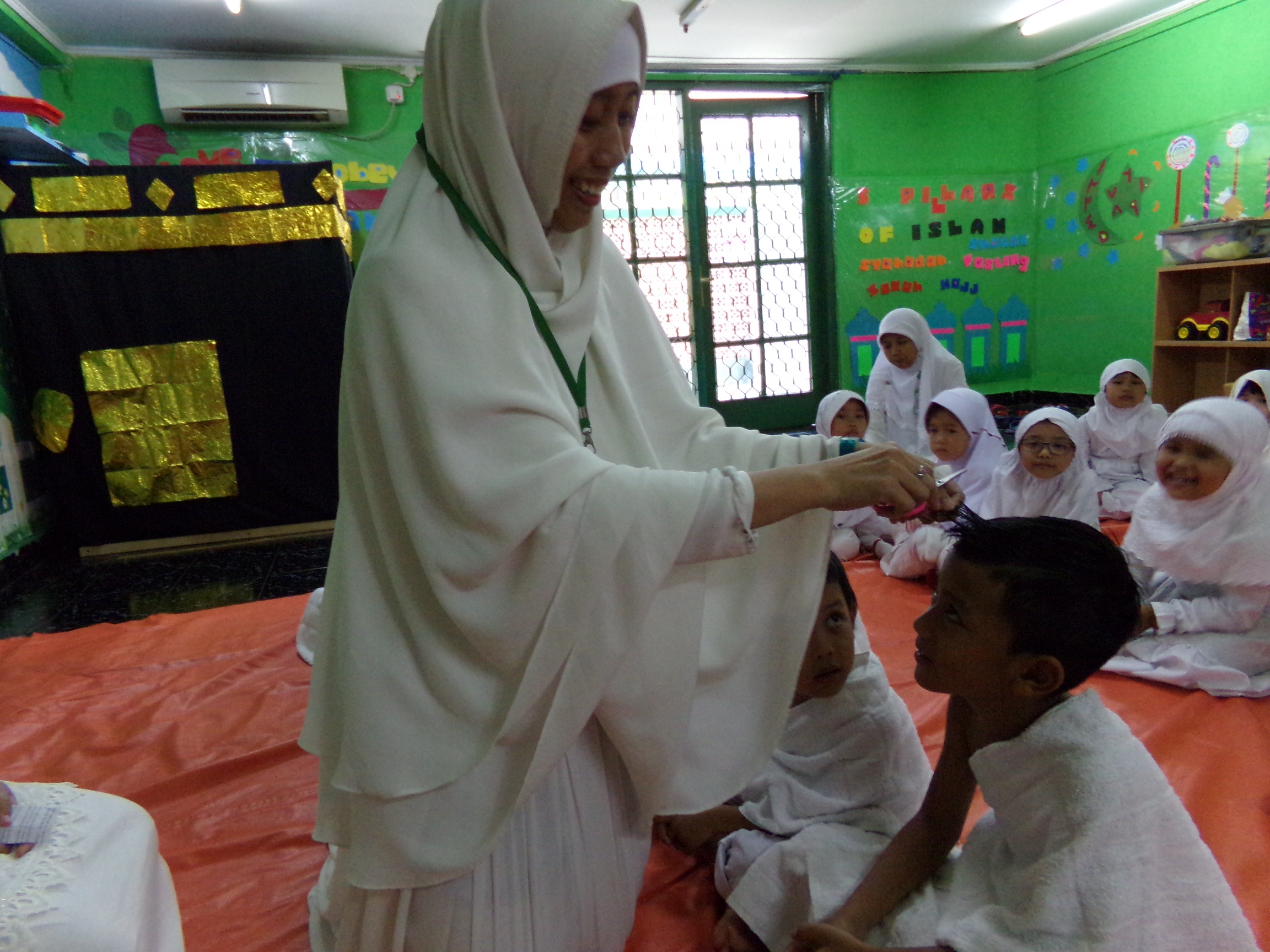 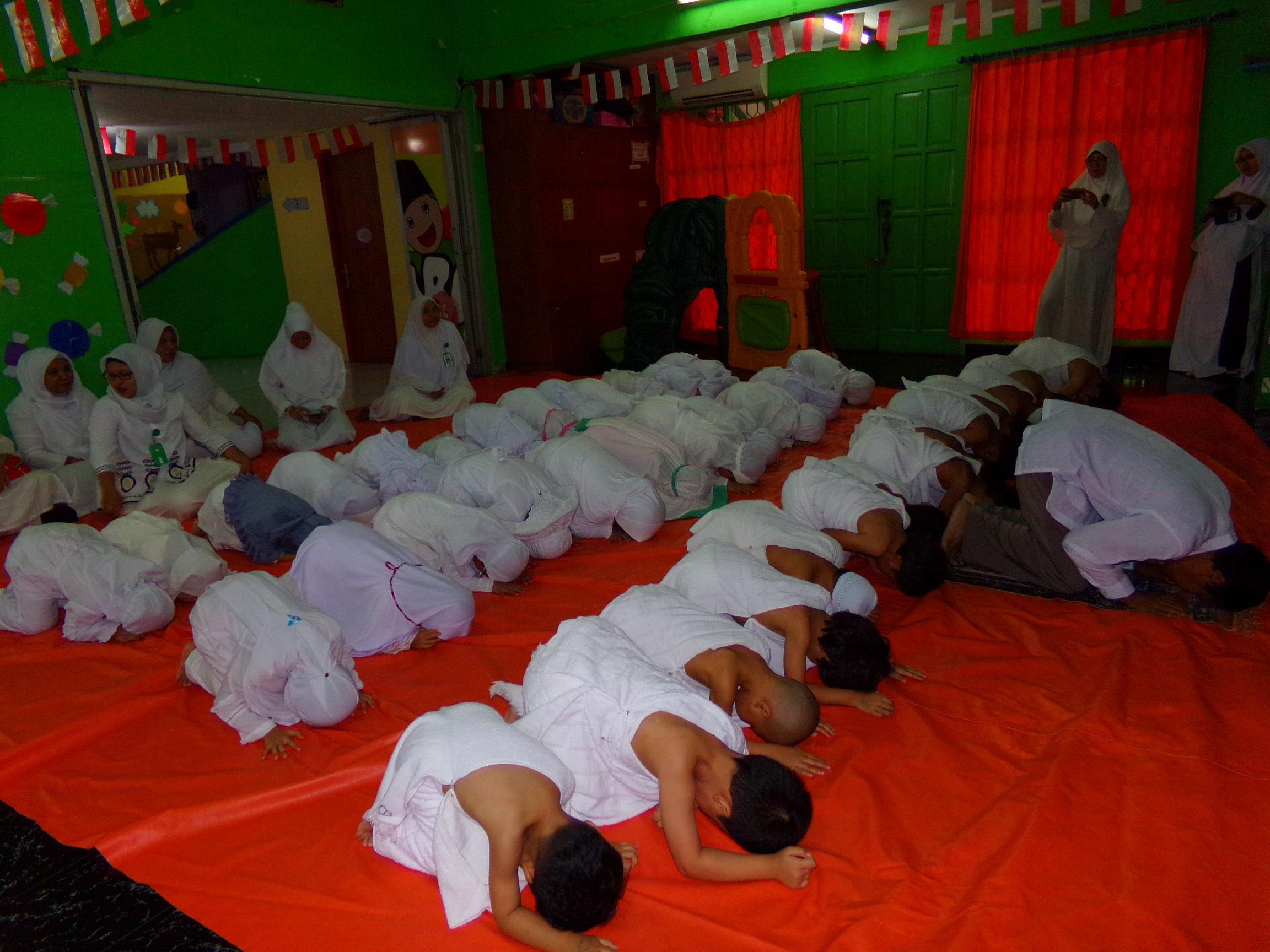 We celebrate something because there is or there are reason(s) behind it. We celebrate Indonesian Independence Day because we want to pay tribute to the people who fought hard and lost their lives for Indonesia freedom. It reminds us that we should be ready to defend our country. Celebrating Independence day also means to get the feeling of oneness to be blossomed in the heart of Indonesian people no matter where they are and no matter what area they are from. This feeling will motivate Indonesian , young or old, to contribute toward the country.

We celebrate our independence day in several ways. One of the way is by holding different kinds of competition, to demonstrate the spirit of getting something done and to show how great it is to be the winner after the hard effort.
We celebrated Indonesian Independence at school to let the children how to appreciate the people who fought and lost their lives to get the freedom and practiced their abilities in different areas of development.

Alief had ball racing game and Ba class had flag racing which practice their eye and hand coordination, fine motor skills, gross motor skill as well as their social emotional skill. For them the process is much more important than the result.

Ta class had stacking cups racing where the children practise their eye and hand coordination, concentration skill, fine motor skills, gross motor skill as well as their social emotional skills.They also learn to acknowledge a sense of accomplished when they become the winner.

Abata class had clog racing where the children practise their eye and hand coordination, concentration skill, fine motor skills, gross motor skill as well as their social emotional skills.They also learn to acknowledge a sense of accomplished when they become the winner and learned that there are times to be the winner and there are times when they are not and that is all right.

We would like to inform you that there will be a market day activity on Tuesday 26, September 2017. The activity will be held at 8:30 until 11.30. Children will take turn to be seller who sell the thing that they make before hand with the teacher in the class and to be the buyer of things that children from other class make. Children will do the transaction using coupon and are entitled to use 2 coupons.

Meanwhile, the parents can participate in this activity to be the seller or buyer. If you are interested you can buy a table for Rp 25.000 and sell anything that you do not want to use anymore at home like women, men and children clothes, toys, books (adult and children),bags (adult and children),accessories (adult and children) and other things especially kids things with the price range from Rp 5000; to Rp 100.000. Please book your table to Miss Henny. The latest will be September 20, 2017 for table booking.

If you are interested in becoming a buyer, you can participate to buy things that teachers or other parents sell. There will be no class activity on that day

Have a fun break children